I’m certainly not a professional welder, I’m a novice (and novice is giving me a lot of credit)

I have a cast iron Stover pump base that was broken into 5 pieces.  I used your 77 cast iron weld rod and a Miller AC/DC 225 amp welder.   The rods worked perfectly!  I welded at 70 amps.  Easy to strike and easy to handle.

Thank you for such a fabulous cast iron weld rod, I highly recommend this rod!

The part was broken into 5 pieces, so first Herman cleaned each part to remove all oxidation and impurities.

After preparing the cast iron, Herman set his welder to 70 amps and tacked the parts together.

Tack welding is a process of aligning the parts and applying small bursts of weld rod at intermittent intervals.  This technique acts as a vise, holding the parts in place while the weld repair is performed.

After tacking the parts, Herman then beveled each weld area.  Beveling the cast iron prepares the metal by cutting an angled slope on the edge of the metal, which allows space for the 77 rods to pool and fuse with the parent cast iron.

Herman worked the repair one break at a time, working his way around the part until all 5 broken parts were bonded, good as new. 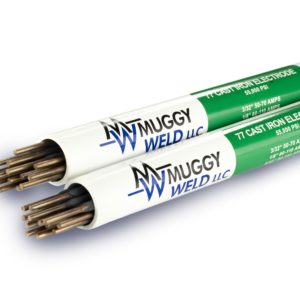