Family owned and operated for over 30 years, Muggy Weld premium welding supply products are MADE IN THE USA items distributed through our online welding supply store

You can count on Muggy Weld to provide premium welding supplies that will save you time and money on repairs. We serve welding-industry beginners and veterans alike by providing top products and educational resources. Whether you’re brazing aluminum, welding cast iron, soldering pot metal, or anything in between, our online welding store carries only the best products for you. 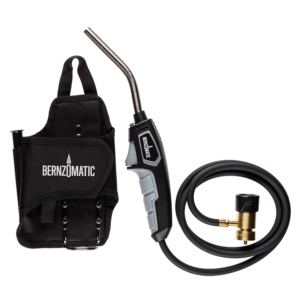 $70.00
BZ8250HT is recommended for use with all Muggy Weld brazing and soldering alloys
Buy Now Featured videos.
Please use the "view all videos" link below to access 100+ free instructional videos.

Premium Welding Rods and Fluxes for Brazing, Soldering and Welding

Super Alloy 1 demonstration of how to repair pot metal parts, quickly and easily. Pot metal is an alloy comprised primarily of zinc, copper, and tin that has been widely used in the construction of hood ornaments, grilles, door handles, steering wheel centers, and a variety of dash and trim pieces for antique autos. Tips for welding white metal. Premium Welding Rods and Fluxes for Brazing, Soldering and Welding 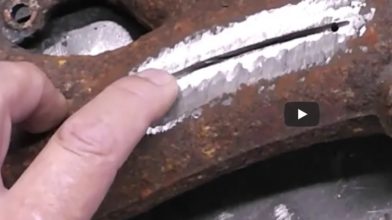 I didn't forget you, but had to put the project aside for a while. I'm still not done as I wanted to include a pic of the fitting installed in the cowling but I can send that latter.

I think the original question was -- is there an issue with welding a steel cad plated bolt to Al? From the pics I think the answer is clearly no. Although the it appears that there is no cad plate left on the working end
of the clevis. But that won't be a problem.

The problem in this weld is that the 1/4 inch Steel clevis pin and .030 Al sheet have drastically different Temp coefficients and mass so getting an even temperature was difficult. After a couple of not so pretty attempts, I
put the clevis between the fire bricks as shown and carefully heated from the bottom. The result isn't perfect but good enough. I'll place a backing plate over it as shown, and then rivet the assembly to the cowl. The extra
plate probably isn't necessary.

After I finished a friend suggested a better way. Buy a used toaster oven which can easily cook to over 350 degrees, heat the assembly in the oven and then apply the weld rod. That should provide an even temperature across both parts. I haven't tried it but if I have another application I'll give it a try. BTW a friend who is an AI (licensed Aircraft Inspection Authority) was impressed, but technically it's probably not legal. And it is quite
strong. Got my Super Alloy 1 kit on Saturday and used it to repair a pewter tankard with a broken hinge on the lid.
In 40+ years as a jewelry repairman, pewter repair has always been considered "impossible" but the repair was fairly easy with the Super Alloy 1.
Heat control was very important as the tankard lid was very thin, but in the end the repair was strong & serviceable.
A quick touch-up with artist paint matched the old oxidized color of the lid & the customer was very happy.
Thanks for an excellent product & the online videos were very informative and helpful.

My Super Alloy 1 starter kit was delivered few days ago. I tried it in the damaged carburetor and it worked perfectly. I’ve been able to patch a crack and a hole and tap a new thread. Now it’s back to life!
This product is a lifeline for the vintage auto enthusiast.

I’m very satisfied! Thank you for your support.

P.S. I wrote a positive review on amazon.

Your SSF-6 product is great stuff. I've used it to fabricate and repair a number of tools and fixtures for our sewing business. I see you guys are in Olympia--glad to support a local company doing good work. Seriously, i just received my Super Alloy #1 and used it! I found this product during a YouTube search and could not believe a product was this fast and easy to use. A local hardware store told me they had some aluminum brazing rod that would work on the project i was working on, boy where they wrong! Frustrated, I decided to order your product and to say the least i am impressed! This by far is the best product i have ever used, and i will continue to buy more!!!! I will post pics and project when they are done!